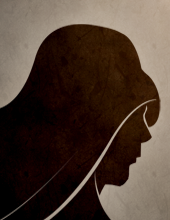 Empress of the Underworld--or so it is whispered, around the corners and alleys of Spite; muttered between couriers doing their acrobatics in the Flit; rustles of it even across the river.

Far less discreet are those at Medusa's head, where they sing sea shanties in her name--she is a she, is she not? Never the matter; the few of her criminal empire who get to debrief to her directly, as well as certain less morally inclined members of High Society all report her wearing nothing but the most exquisite of gowns rumoured to be sown from Ivory Organza, combined with concealing veils and gloves of Parabola-Linen.

Do not cross her. The last person to try... well, it is hardly pleasant a tale. Let's just say there weren't enough pieces of their body left for it to bounce back from it.

Yet she also takes care of her own; after all, there is a reason one of the many titles her Royal Tigress has had bestowed upon her is 'The Mother of Outlaws'. Ah yes, the Tigress--one of the many reasons one should approach Professor Anaïs Grant, as she is known in civilized circles, with extreme caution. The feline is never far away from her Master.

And she likes her prey live.

The Irigoat always watches. Do not delude yourself into thinking you can hide from it. It knows.