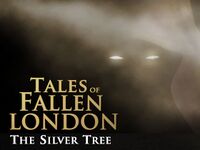 The Silver Tree is a Tales of Fallen London is Kickstarter funded prequel to Fallen London. The project launched in early August and met its pledge goal quickly.

The Kickstarter project describes the game as follows:

It’s the 13th century, and the Mongol Empire covers half the world. Its capital is the city of Karakorum, at the heart of which stands the silver tree fountain - the envy of nations. But the incendiary relationships between the Khan, his ambitious daughter and a patriotic spy threaten to tear the city apart.

As an emissary to the Great Khan’s court, you will navigate a web of intrigue, love and betrayal. Choose your cause. Fight for what you believe. Spy. Investigate. Negotiate. Lie. Decide the fate of a city.

The Silver Tree will be designed and written by Yasmeen Khan - writer of many of Fallen London’s most beloved stories, including An Intimate of Devils and What the Thunder Said - and illustrated by Paul Arendt, our magnificent artist.

You have a deck of cards. Each card represents a chunk of story. The contents of your deck are determined by the choices you’ve made so far. Clicking on a deck fills your hand from it, showing the stories available to you. To give you an idea, here’s what Cabinet Noir, another game we’ve built on the same platform, looks like: 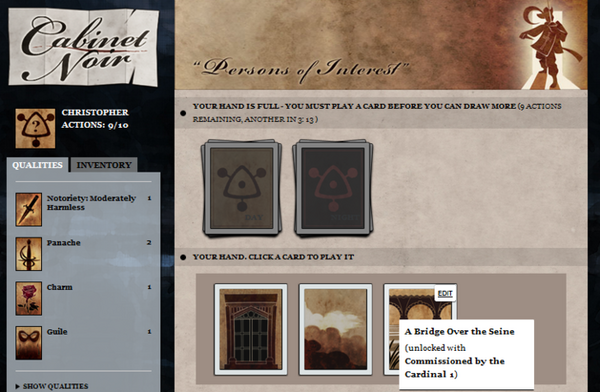 When you play a card from your hand, you’re presented with an event and the choices you can make in response. What you choose will shape your character, the world around you, and the direction of your story. Here’s how the story interface looks: 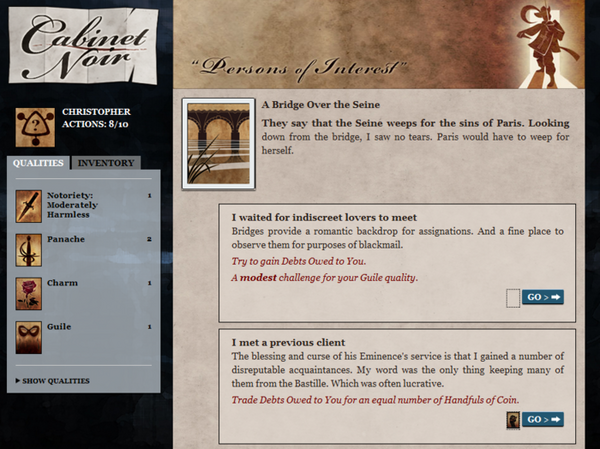 The Silver Tree will be a free-to-play game. While the core story can be played by everyone, additional stories can be purchased in-game, allowing you to delve into the world’s deepest secrets and interact with new characters who bring their own agendas and schemes to Karakorum. Our pledge rewards grant discounted access to these extra stories.

We like to tell sophisticated stories that stay with you— stories that unfold over time, that you can immerse yourself in. To support that, our games are played sporadically, in short, meaningful chunks. You have a pool of actions, and spend them to draw or play cards. You get an action back every 10 minutes or you can purchase action refreshes if you’d rather not wait. Our pledge rewards come bundled with heavily-discounted action refreshes to let you control the pace at which you play.

These can also be found on the Kickstarter page. 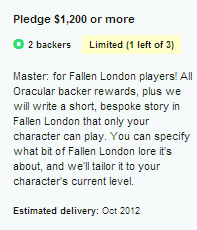