A damp fog fills London’s streets. Londoners of all stripes lurk in its concealment: masked, cloaked, triply hidden. It is the season of Hallowmas, of the commission and purging of sin. Londoners seek out the Attendants – the masked representatives of the Bazaar – to be shriven.

Hallowmas is Fallen London's annual feast of masks and confessions. Hallowmas starts roughly a week before Halloween and ends a week afterwards. The feast is composed of two separate parts: gaining

Spirit of Hallowmas and upgrading companions.

At the beginning of the event, you will be asked to choose a mask to don. There are three masks to choose from:

The Crown (suspicion) and

The Moth (nightmares). (The

The Demon (scandal) is not available this year.) Regardless of which mask you choose, you may change it during the event at the cost of 10

Spirit of Hallowmas via the story Change Your Mask. Each mask will allow you free access to one of the three special Hallowmas locations for free and is linked to a specific Menace and factions. Something else to take into account when choosing masks, is the opportunity card that you'll be getting for the rest of the year. Read below for more info.

During Hallowmas, three new places will be available to visit and enter regardless of which mask players are donning. In these places, players can increase their Menaces by spending actions and items. Different options will appear based on the

Airs of the Hallowmas Season. It is possible to get to 7 by just spending actions, but it's slow. It's much quicker to spend items (each place will ask for different items). Once you reach 7 of a Menace during your visit, you'll be prompted to leave.

You can get free access to your current mask's related location via opportunity card, or you can go to where each of them is located in and use the story to enter. You'll have to pay one of the related factions' favour as a fee, though. It's also possible to trade specific confessions in each of the places.

Criminals. Its opportunity card (The Squall of Infants), will allow you to either enter for free, or refuse free entry and get

Shapeling Arts 3 (that last one requires you to be donning

The Infant). If you have

The Infant equipped, you will unlock new options in

The Roof Below. Not only do these options not consume items, but they also give more

Wounds than the other options.

The Great Game, and

Revolutionaries. Its opportunity card (The Flight of Moths), will allow you to either enter for free, or refuse free entry and get

Urchins. Its opportunity card (The Crown's Splendour), will allow you to either enter for free, or refuse free entry and get

1 x Knob of Scintillack, or

Aside from the Masques explained above, you can gain menaces via traditional methods. Notable methods include Listen to the silence, keeping in mind that you can enter and leave Underclay for free if you haven't cashed out yet, and Attend and speak of...terrible things.

Nightmares with only one action[edit]

The following process takes several card draws, but only one action. If you don't have the

Starveling Cat or other needed items / qualities, there are still some neat tricks you can use.

Once you have a total of 7 of either nightmares, wounds or suspicion, The Fool's Judgement story will appear and it will allow you to reset your Menace in exchange for a number of

An analysis of when to cash in Menaces for Spirit shows that it is (almost) always better to turn in Menaces with as high a level as possible, but the difference between cashing out at 8 vs. 10 is usually less than 4% because of diminishing returns. Only when you gain 5 Menace CP per action does cashing out at 9 instead of 8 make a significant difference of 11-12%.

Bear in mind that while you can turn in any Menace except scandal (in 1899), some of the options/rewards you get at the end of the event will change depending on which Menace you turned in the most.

From a monetary perspective, each

Spirit of Hallowmas will get you 0.25E of items at the end, for a total of up to 625E at 2500 SoH. As you effectivly gain about 2/3 of your Menace CP as SoH, Menace CP might be valued at 0.17 Echo. Of course, some of the rewards consist of stuff which is otherwise hard to come by.

When the Hallowmas revelries come to an end, you will encounter a universal storylet named Hallowmas: The Fool's Justice. Here, your Spirit of Hallowmas may be traded in for a variety of rewards, and you will receive a gift from one of the leaders of the Masques depending on which Menace you submitted most often and whether you have received a gift from them in a previous year.

Rewards for turning in spirit[edit]

There are six types of confessions: curiosity, impropriety, pride, guile, whimsy and violence. Each player will get a total of 14 confessions that will be available through Collect Another Mysterious Confession. This story will be automatically enabled twice during the event, and will give seven confessions each time.

The only way to get more than 14 confessions is to pay FATE for extra random ones.

The type of the confessions you gain are random, meaning that you'll often not get the ones you need. However there are two different ways of turning them into other types, via masques or by player trading.

Every Masque lets you trade some confessions for different types. It is possible to convert any Confession type to any other, although in some cases it can take several exchanges across several Masques, which can be time-consuming.

The image below shows the loops and cycles that these exchanges form. The triplet of Whimsey, Guile, and Violence form one loop which can be exchanged in a cycle crossing the three Masques. The remaining triplet of Curiosity, Pride, and Impropriety form another such loop. These two loops are connected by the conversions from Whimsey to Pride, and from Impropriety to Violence. The longest conversions are between Guile and Curiosity in either direction, which requires entering and exiting four Masques and performing five total conversions. 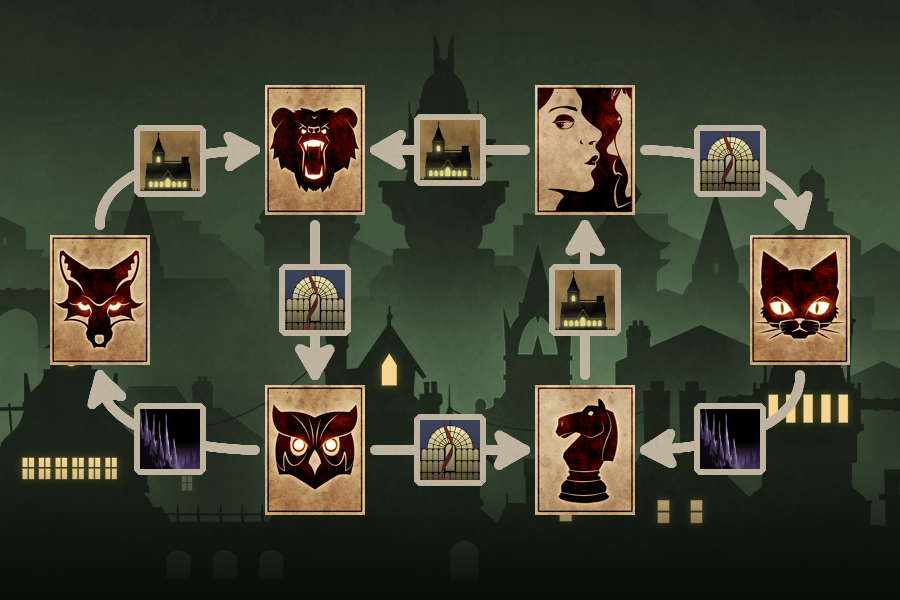 From the beginning of the event, players will be able to trade confessions via social action as many times as they wish.

Companions can be gained under Unburden Yourself to an Attendant storylet (which can be accessed through the main hub via Seek out the Attendants) by paying the right confessions + an un-upgraded version of that companion.
You can only get one of each upgraded companion, but as long as you have the base companion + confessions you can gain each variant of the upgraded companion. The available companions change each year making old ones impossible or FATE-locked.

You can also get the upgraded companions from last years Hallowmas by paying an FATE price between 10 FATE and 30 FATE.

It is useful to know what your deadlines are. As of 2020, the timing of different events is recorded below. Past events are no guarantee of future behavior. All switch-overs happened around noon-ish GMT.