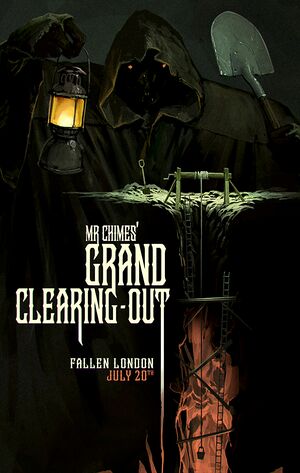 THE BENENIMOUS MASTER OF THE BAZAAR, Mr. CHIMES, graciously invites YOU to take part in a CELEBRATION of SUBTERRANEAN PURSUITS – the GRAND CLEARING-OUT!

The MASTERS call on ALL LONDONERS to EMPTY OUT YOUR ATTICS and RECLAIM BURIED TREASURES from beneath LONDON’S OWN STREETS. Participants will be rewarded handsomely with THE SPOILS OF EXCAVATION.[1]

Mr Chimes’ Grand Clearing-Out was a new, one-off festival in Fallen London. It began on 20 July 1899 (2021). The festival was open-ended and consisted of player collaboration in excavating materials out of 5 dig sites opened around London. Included with the possibility of purchasing items from past years' elections, five new items were launched. These (and past election items) could be purchased through the use of Chthonic Scrip, a new in-game currency introduced for use during the festival alone.

This is how much progress was made every day at each dig site, recorded at midnight BST. Dig sites also had to be funded by purchasing

Chthonic Scrip, but this goal was completed for every site on the first day of the event. 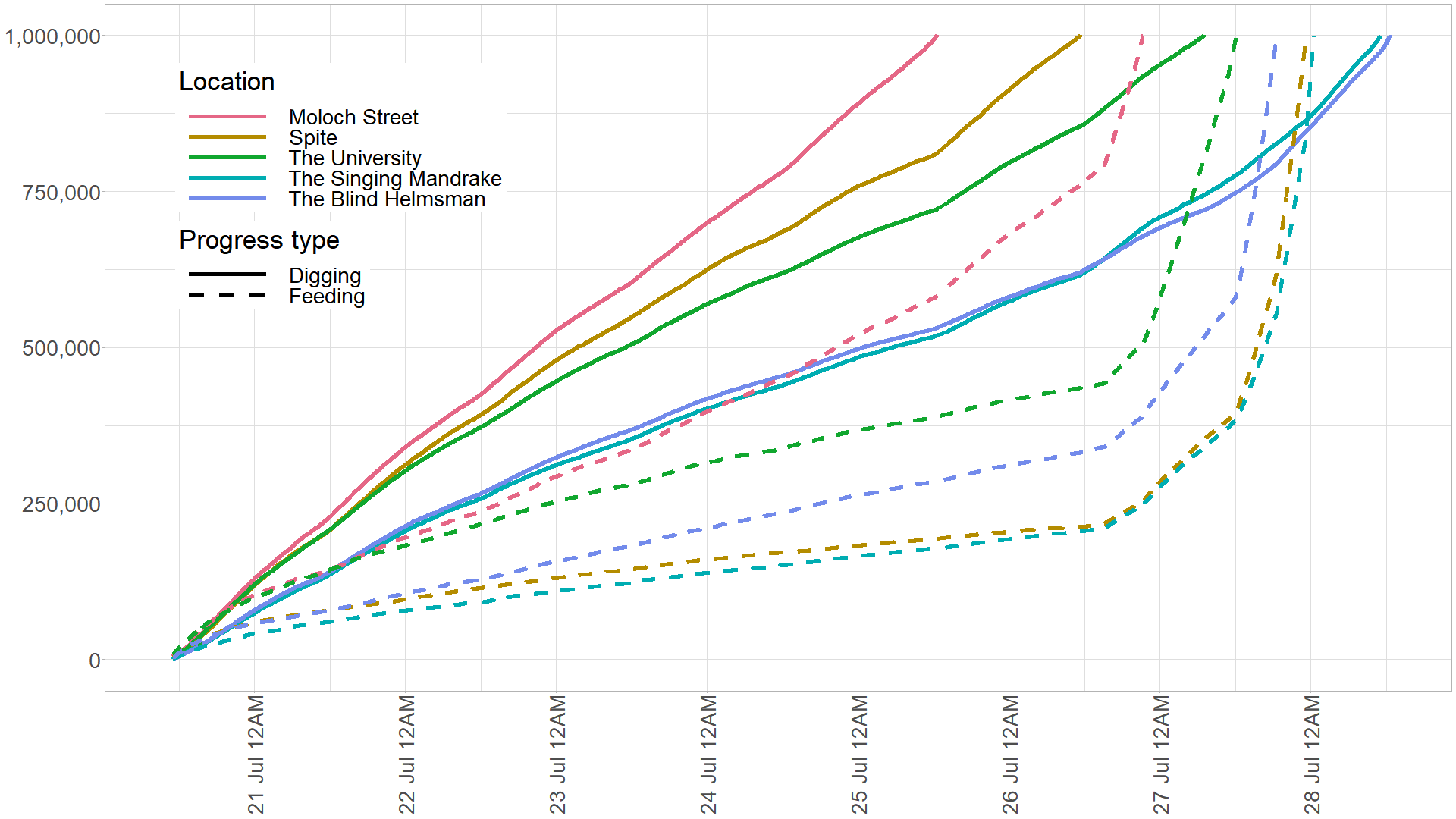 The new items introduced at the beginning of the event were:

These were made available to purchase with

200 x Shard of Glim, and otherwise purchase Chthonic Scrip for FATE at a 1:1 conversion rate. If a player had an unused

Free Gift from a past election, they could turn it in for another 30 Chthonic Scrip.

Alongside these new 'paid' items, players also obtained a

Sturdy Pick at no cost, and contributing at various locations discovered two more items obtainable without Chthonic Scrip, made available by individual digging or feeding progress:

In addition, specific items from past elections (which could be obtained with

A Free Gift or had cost FATE previously) were included in excavation spoils as well. These were:

Digging and feeding could also notably give out

Anticandles as a reward, an item that shares the same name as a retired Advantage, and at the time of the event had no other sources that were allowed to be recorded on the wiki.

Within two hours of the event opening, each of the five locations had been fully funded by Chthonic Scrip.

Community efforts to compile and elucidate the revelations glimpsed through In Their Wake began.[4]

At around 10:30 AM UTC, players had just about used up any sustenance items (

Hand-picked Peppercaps) stockpiled between the time of the announcement of the event on 12 July and the time the event started.[5] This meant that progressing the digs through

Feeding the Workers would be slower from that point on, since more items had to stockpiled again, and more profitable options through the Bone Market could be locked by

Bone Market Exhaustion for some players. In response, Failbetter made it possible to go

Brawling with Dockers for Incorruptible Biscuits without having started a Railway, so that more mid-game players could contribute to feeding progress.

1 x Legal Document each, valuing them at

12.50. This was done because they have few uses, and since they were previously unsellable, the reward for finding them through

Feeding the Workers had been relatively unprofitable compared to other Feeding rewards.

Among Fallen London communities, a new 'Brass Lollipop' strategy began to gain traction. As part of this strategy, players changed their profession to Licentiate en masse in order to receive free skeletons that only needed a skull by supplying a skeleton of their own. Players that were not Licentiates could use

Headless Skeletons instead. They then capped these with

Bright Brass Skulls and sold the completed skeletons to

A Theologian of the Old School for

At 02:10 UTC, there was a stirring below, the same stirring that had been giving Londoners strange new dreams. Following the excavation efforts across the city, Londoners felt tremors coming from underground, both within the tunnels and above the ground. According to Bruno in the FBG Discord,[9] the rumbling was triggered by overall progress reaching a particular threshold, albeit with a bit of a delay due to behind-the-scenes implementation details; therefore, it appears to have been triggered by reaching 40% on digging and feeding combined, although this is not certain.

“MINISTRY WARNS AGAINST CONVERSATION WITH ITEMS UNEARTHED IN SPITE”

At 05:56 UTC, 50% completion for combined Digging and Feeding progress across all dig sites was reached. Later in the day at 12:28 UTC, Moloch Street also became the first site to have its Digging progress completed.

Spite became the second site to have its Digging progress completed at 11:21 UTC. Additionally, as the dig sites progressed and supplies for workers were being rushed all over the city, Londoners began to run into the occasional upturned cart with food and tools. They were generously able to point the carts’ drivers in the direction of one of the dig sites, so the supplies could be put to good use feeding the workers. This was triggered by reaching a total of 2000000

At 21:16 UTC, Moloch Street was the first site to be fully excavated. This revealed a number of new fueling options, each of which was locked behind the completion of a particular dig - Moloch's option was Fuel the excavation with fervor. This, combined with the grind revealed by the excavation, rapidly led to the development of a new fueling method; collecting

Apostate's Psalms from Marigold station and

Verses of Counter-Creed from below Moloch Street, then spending them. This method was slightly better than non-Licentiate Brass Lollipops, and had the significant advantage of not requiring you sell most of the things you dug up.

“yours is not to reason why; yours is but to dig or die”

At 00:25 UTC, Feeding progress was completed at The Singing Mandrake, meaning all Feeding progress was done. This quickly sent Londoners into a panic, however, as more and more upturned carts began to pile up in the streets with no dig sites to be sent to.[13] The community united in the face of this unexpected turn of events by making many memes and an unbridled neigh-mber of horse puns. Some embraced their new horse overlord, even calling for a horse mayor (perhaps London wasn't quite ready to say goodbye to having an animal in the mayor's office?). Others coped by begging the Masters (Bruno in the FBG Discord) to remove the carts, who only responded by telling them to get back to work unearthing the rest of the dig sites.[14]

However, Bruno changed his mind - and the requirements on the card - at 8:38 UTC,[15] which lead to a vast outcry from people who now regretted complaining about the horse. A great many Seeking and Discordance (Disc-horse-dance?) references were made, along with some poetry[16][17] and even more horse puns.

At 11:05 UTC, the Singing Mandrake was the fourth site to be fully excavated. Then finally at 12:38 UTC, the Blind Helmsman was fully excavated, meaning all dig sites were unveiled. There was briefly an issue where people were getting stuck in the revealed carousel, resulting in the dig completion option being locked, but this was soon resolved.

Then the Stone Pigs woke up. Persons of Some Importance were invited to an emergency meeting by the Masters, where it was revealed they were building a device to put the Pigs back to sleep again; everyone else found this out second-hand. Players could contribute objects of great value to the device, increasing

Assisting the Masters and conferring the status of

A Preserver of London on them; they could also save the citizens of London from peril by searching amongst the rubble.

Breath of the Void that could be used to contribute to building the machine. The Masters received the last of the materials they needed to make the device at about 17:59 UTC,[20] but they continued accepting materials anyway.

Saving the Citizens of London reached its goal, beginning the process of incrementing

A Reckoning Postponed. This counted up once per hour, essentially beginning a 21-hour countdown until

Saving the Citizens became unavailable, and a 24-hour countdown until the Masters were no longer accepting item donations.

A Reckoning Postponed reached 21, locking London's Plight. In the end,

A Reckoning Postponed reached 24, locking Building a Device; all told,

Assisting the Masters reached 2,415,693, or 241% of the original goal, representing about 4.86 million Echoes (~30.36 Ciders) worth of materials donated. Those who had donated to the Masters were able to be present for when the Masters activated their device; the others were able to watch from the streets of London. When the device was activated, it drew all of London into a shared reverie of London and its streets (save for a select few, who dreamed of something else), and put the Stone Pigs back to sleep. Players returned to their lodgings to rest, with those who had helped out finding that they had acquired

– Mr Wines, at its celebratory revels

In the aftermath of the Great Sink, Londoners could contribute to

The Recovery of London, which notably gave a new item, an

Exigent Note. They could also even adopt

a certain horse. The card with both of these options is intended to stick around until next year's July event, as indicated by the 48

Weeks After the Great Sink requirement,[23] effectively as a replacement for the Lord Mayor of London opportunity card.

The Recovery of London has a target of 1,000,000 like the Digging and Feeding qualities did, and is being tracked here.

Those who had helped the Masters with their device were additionally rewarded at a special meeting, depending on their

Motivation: either at a revel thrown by Mr Wines, at Beatrice's Tea Parlour, or in their dreams. As a reward they received a

Bottle of Morelways 1861 'Sporeburst' if they were motivated to save the Masters, an

Unusually Loyal Map of London if they were motivated to save London, a

'Look Always to Love' Telescope if they were motivated to save the Bazaar, or a

Decemberist Pocketwatch if they were motivated to safeguard the Revolution. Per Bruno in the FBG Discord, these items are only intended as mementos.[24]

“URCHIN RESCUED FROM COLLAPSING BUILDING FOR THE SEVENTH TIME”

Mr Chimes' Grand Clearing-Out officially ended on 5 August, 1899 (aside from the collapsed buildings and streets that still needed to be repaired). Players with at least 10 remaining

Chthonic Scrip could either exchange it for a

Exigent Note, or get rid of 3 to keep 7 Chthonic Scrip as a memento. The Viscountess also finally returned to London, making her eligible for the Railway Board once more.