This guide tries to cover the basic mechanics of zailing. For more info on the locations you may reach (and why you would go there), see the location guide.

In order to own a ship, you must be A Person of Some Importance -. Until then, you may travel to Polythreme via A Ticket to Polythreme at the Wolfstack Docks, or to Mutton Island via Board (only during the Fruits of the Zee Festival).

Once you're a PoSI, you can start working towards Acquiring a Ship. The PoSI Item Crafting guide includes details on getting ships. It is generally recommended to start with the Rusty Tramp Steamer, as the Clipper, Zub, and Yacht are significantly more expensive. It is possible to trade in ships at any time.

Zailing Speed is a measure of how fast your ship is.

Luxurious open branches that give more material rewards than usual.

Which ship should I get?[edit]

As a new player it may be hard to decide which ship to get. This may also be hard as an experienced player. In order to decide, here's what each ship tells about you as a player:

What does my ship say about me?

Zailing is done on non-discardable opportunity cards. Most cards will provide

Zailing... equal to your ship's

Zailing Speed and half of that on some failures and other options. They might also give you menaces (see the menace section) or material rewards. For zailing to a new region, you will either zail with the currents or against them. The currents go counter-clockwise on the map, as can be seen on the model below. Experienced zailors may also zail through the Snares (DON'T DO THIS EARLY ON). Once you have reached your region you will zail directly to your new location.

If your destination is in the same region as you, you will need 80

Zailing... and not gain any

1 x Zee Legs per region on your way, except for your destination region, where you will only need 80. Discounting currents, this means that returning to

Home Waters (the easiest region) even from safe ports is generally a bit more difficult than leaving from there but don't fret -- everybody returns to London eventually.

The table below shows how much progress is needed to reach the next region or your chosen area. Options that give half speed are considered 0.5 actions. 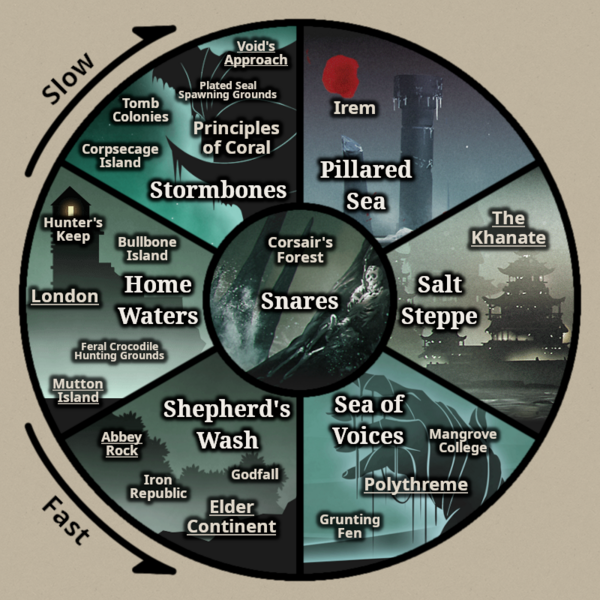 The Broad Unterzee is divided in several different regions. Each has its own difficulty, also known as

Shadowy etc.) are equal to Zee Peril. Some narrow challenges against skills (e.g.

Kataleptic Toxicology) using a logistic relationship to Zee Peril[1]. Some challenges do not adjust difficulty by zone, notably the one that tests against

The following table shows the different areas, based on region and additional requirements or notes. See the location guide for a more in-depth guide to the locations. Safe ports remove Troubled Waters and all zee-threat qualities upon docking.

As these aren't docks, they will not reset

Making Progress in the Labyrinth of Tigers 16.

In order to see a location on the Zee map (and subsequently travel there), you need to have first discovered those locations. For the locations where this is mentioned as a requirement, there are typically different ways to do this.

The Broad Unterzee is full of menaces. Some of these are just general menaces, while some are more specific. These qualities (except for

Nightmares) are all removed when docking at a safe dock.

Note that Zee-Menace cards are Urgent, meaning that they will always be drawn before other Zee-cards if eligible. If you have more than one Zee Menace with Troubled Waters 7, you will not be able to draw other cards.

These qualities allow you to dream new dreams in London. Actions first increase the wind qualities by 4 CP, then by 1 CP per card. They do not reset when docking and once you have experienced the winds for the first time, more cards will increase it. Each finished dream storyline will give you an

Oneiric Pearl, reset the storyline and grant a special quality that will allow you to dismiss the related dream and clear its wind once you draw the card again - or you may keep dreaming for more

See this page for a list of all the opportunity cards at Zee.

Below are the cards that do not increase

All Zee Menace cards (dark green or black borders) also always reduce Troubled Waters, except for one option on A Worrying Appetite.

Somewhat ironically, one way to avoid accumulating to much

Troubled Waters is to travel through the Snares instead of around. For example, going from the Salt Steppes to London along the current would take you along the Pillared See, which is just somewhat safer than going through the snares. But afterwards you will have to pass through Stormbones, giving you additional chances to lose your mind or becoming dinner. {{Citation needed}}

Whenever you leave a region, you gain

1 x Zee Legs. These can be expended in

Wolfstack Docks to improve your skill in Zeefaring. The required amount of Zee legs required increases based on the table below. Zeefaring is required in order to trace a route through the snares, which is often useful for shortcuts. Zeefaring is also used on several opportunity cards at zee. Zee Legs can also be used to assemble